Top 4 Places In The World To Go Hot Air Ballooning

About Outdoor Activities
Imagine yourself silently drifting along under colourful silk, cradled in a giant basket. You’re part of the breeze and Nature as you tranquilly float on the air over undisturbed scenery below. Your pilot lets the heat in the balloon drop to silently lower you closer to your birds’ eye view… then lifts you to majestic heights over an unforgettable panorama.
As epic as your photos will be, they will never match the reality of your experience.
If that is your idea of a bucket list trip, here are 4 of the most magical hot air balloon destinations in the world to make that travel dream come true.

A hot air balloon ride is so much established as the best way to experience Cappadocia (pictured top), virtually every photo of this region in Turkey features balloons wafting over its legendary chimney rock formations.
Millennia past, the limestone rocks near the town of Goreme eroded into a landscape of fairy spires and pillars. Early people carved subterranean villages with homes, churches and monasteries out of the soft stone formations. Possibly inspired by the mystical atmosphere, it became a monastic center 2500 years ago.
Extraordinary at ground level, the site is other-worldly from the perspective of a hot air balloon drifting across countless minaret-like formations at sunrise. 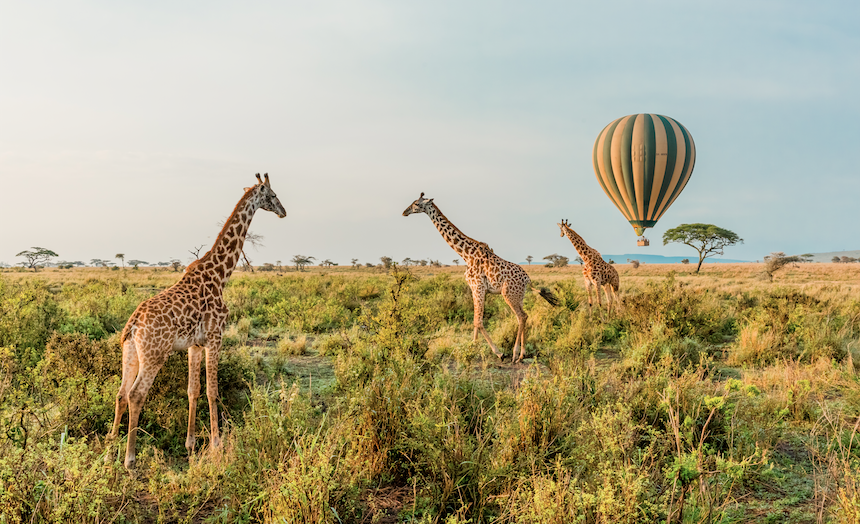 Dreaming of an African safari? Make sure to add a hot air balloon ride to your trip of a lifetime to Kenya or Tanzania.
Even if you log all of Africa’s ‘Big Five’ list of iconic wildlife that includes the elephant, lion, rhino, leopard and Cape buffalo… as well as other exotic creatures like zebras, giraffes, cheetahs, chimps and gazelles from the back of your guide’s Range Rover, don’t miss the scenes of the Serengeti from the perspective of a hot air balloon.
Floating silently – without alerting or disturbing the animals – over the grasslands and canopy gives you the purest way to experience Nature’s wonders below.
Take a hot air balloon ride in Maasai Mara National Reserve in Kenya or the Serengeti National Park across the border in Tanzania between July and October, during the Great migration of gazelles, zebras and wildebeests, and be a witness to the incredible scale of this pre-historic phenomenon. 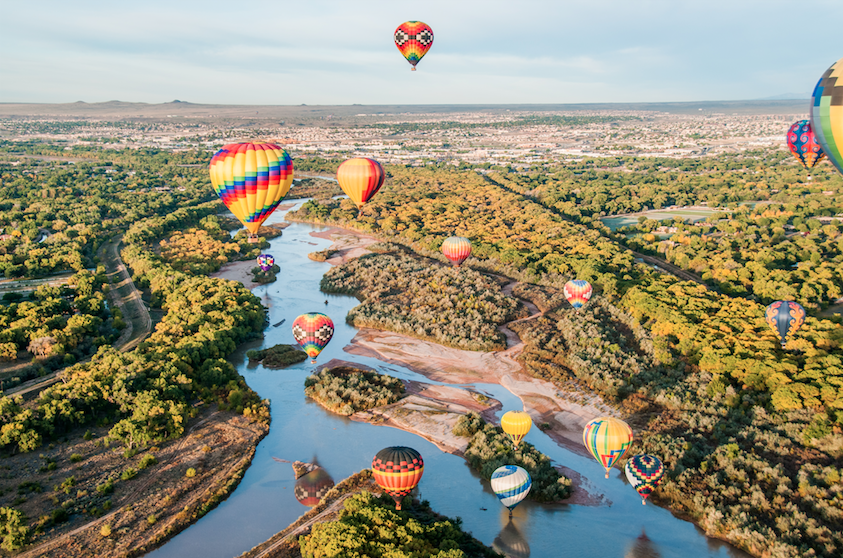 They say it’s the biggest hot air balloon race and festival in the world. For over a week every October, Albuquerque becomes the epicenter of the world of ballooning when it’s taken over by hundreds of hot air balloons during the Albuquerque International Balloon Fiesta.
Whether you’re lucky enough to be in a basket or observing from the ground, you’ll thrill at some of the highlights of the festival. Don’t miss one of the simultaneous ‘mass ascents’ of hundreds of colourful balloons against piercing blue skies. There are even races - although balloons ‘ride the wind’ and therefore travel the same speed as the wind, pilot expertise can influence speed.
Year round, you can hire local hot air balloon pilots for your own ride over the mountain and desert landscape over the Rio Grande Valley. 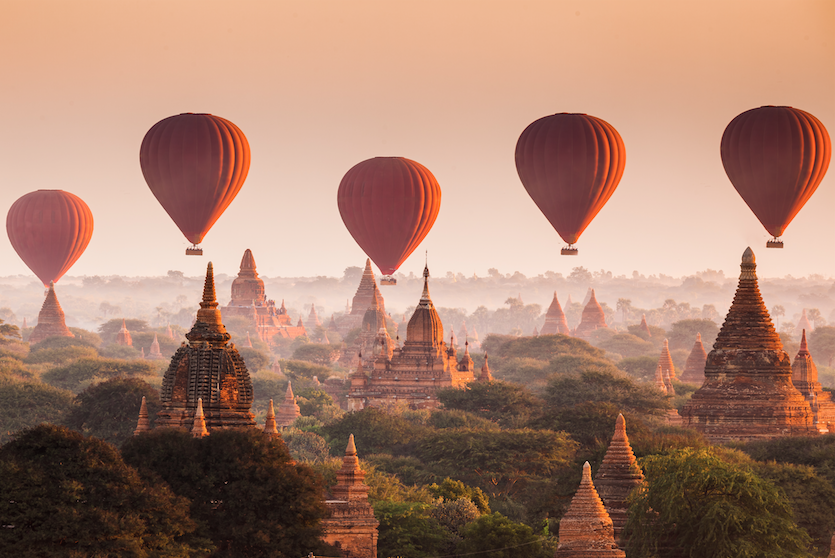 Incredibly, there are said to be 5000 temples, monasteries and pagodas built between the 11th and 13th centuries dotting the plains of Bagan. It was the capitol of a number of ancient kingdoms in this South-East Asian country and is a UNESCO World Heritage site today.
A sunrise hot air balloon ascent at Bagan gives you a breathtaking vista as the ruins glow golden.
It’s also the best way to get a sense of the astonishing scale of this archaeological wonder and the civilization that created it.

Images: Getty
Copyright BestTrip.TV/Influence Entertainment Group Inc or Rights Holder. All rights reserved. You are welcome to share this material from this page, but it may not be published, broadcast, rewritten or redistributed.

The Emerald Isle is Hollywood gold! Lovers of green beer ...

From cultural giants like George Lucas and Bob Dylan, to ...

It’s a tiny island with a big reputation as one of ...