As seen in Drift Travel Magazine 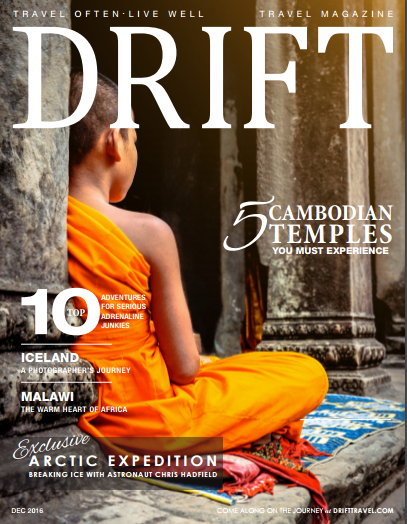 My polar obsession began in 2005, with my first trip to Antarctica. Perhaps because of my biologist background, my travels have taken me to the earth’s wild places, where the impact of human activity is less (but never absent) and you can escape the noise and trappings of civilization to some extent and see how the world once was.

In the summer of 2016, there was a remarkable opportunity to do something truly special: the Kapitan Khlebnikov, a Russian icebreaker, was planning a circumnavigation of the Arctic Ocean. Affectionately known as the KK, she had spent many years as a tourist ship with Quark Expeditions but had gone back to her regular icebreaking duties in Russia in early 2012. So when I was informed of her return, “Book me to Greenland!” I said. And, not long after, “and the Canadian High Arctic too!”

And so, at the end of July, I was on my way to Longyearbyen in Svalbard, to meet up with the ship.

Icebreakers are a different design than regular expedition ships. The KK is a working icebreaker, 123 meters long, with 24,000 horsepower and a cruising speed of 15 knots in open water. In expedition mode, she carries a maximum of 110 guests, six zodiacs, and two helicopters. Her hull strength means she can venture where even the top ice class expedition ships rarely go, and the helicopters gave us unparalleled access to remote areas. The KK, on this leg of the voyage, was going to try to cross into the Canadian Arctic along the north coast of Greenland. The Arctic sea ice is diminishing every year, but what thick multi-year ice there is tends to accumulate along the northeastern part of the Canadian Arctic and the top of Greenland, so we knew it would be a challenge.

We encountered sea ice the day after leaving Svalbard, and spent two days trying to find a way west along the Greenland coast. As polar travelers know, the quickest way through ice is to go around it, so although we did a bit of ice-breaking, mostly we were just pushing our way through leads and between floes, eventually reaching a northern point of 81° 25’ N (about 500 nautical miles from the North Pole). Then, facing massive pressure ridges across nearly solid sea ice cover, and with no leads visible from satellite imagery or helicopter flights, the Captain made the decision to turn back.

After the initial excitement of boarding the ship and learning our way around; the lifeboat drills, zodiac travel briefing, helicopter travel briefing, and polar bear safety briefing (“Can you run 100 meters as fast as Usain Bolt? Well, a polar bear can”), life aboard settled into something approaching a routine. The ship carried a full complement of specialists in the Arctic – culture, history, geology, glaciology, wildlife biology, so no matter what the question, someone knew the answer. Most important, the goal of the expedition team was to get us off the ship as much as possible. 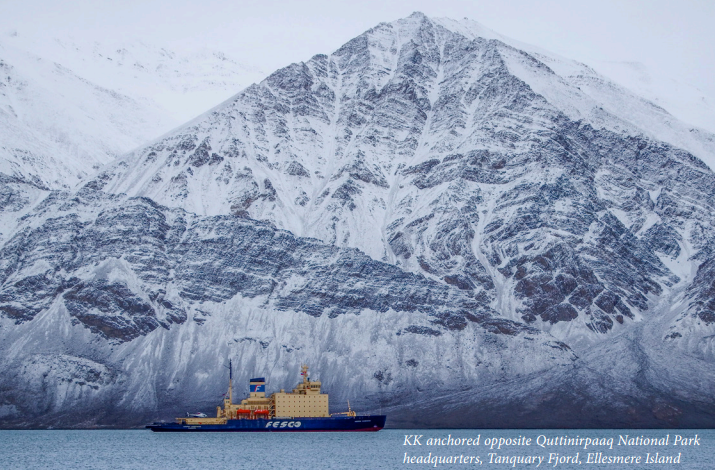 We spent the first several days exploring Northeast Greenland National Park, the largest national park in the world – larger than British Columbia - and a UNESCO World Heritage Site. Then we continued on south, exploring all the fjords, glaciers, archaeological sites (both Thule and Norse), Sirius patrol stations and communities, from Ittoqqortoormiit to Tasilaq, Nuuk, Kangerlussuaq and Qaanaaq, that we could access as we traveled along the coast.

We had two types of shore excursions, both preceded by a helicopter flight to check for bears and hiking routes, and then a few of the expedition team, appropriately armed, going in to set up a perimeter or to take groups hiking. If the weather was calm and a beach accessible, we would go ashore by zodiac (no docks here) and then go off in groups (chargers, who go for distance and elevation, medium walkers, and contemplative meanderers who are more interested in examining the landscape around them than going for distance.) I belong to the latter. The chargers may see more muskox, but we probably come out ahead with lemmings, wheatears and ptarmigan.

Alternatively, the team would find us a nice open spot, usually elevated and with good vantage points and fabulous views of glaciers, fjords and ice, to fly us to, so we could meander at will while the gun bearers kept watch.

In either case, I would often find a spot to just sit, experience the near total silence (something nearly impossible at home), observe the wildlife and just absorb the stunning landscapes around me.

Because of the near-24-hour daylight, if an amazing opportunity presented itself, we could be off in zodiacs or helicopters at nearly any hour. In the end, this is an expedition, and ice and weather, and of course our Captain, are ultimately in charge. 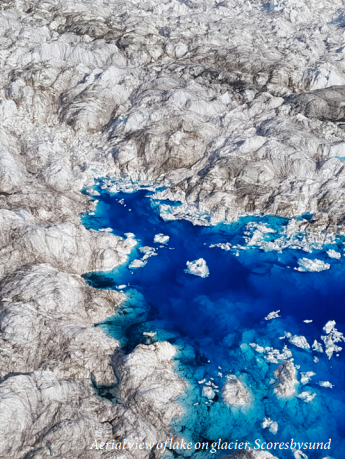 Greenland is 80% covered by an ice sheet with an average thickness of 1500 meters. Around the periphery of the ice sheet are innumerable glaciers, flowing inexorably downwards. Over millennia, the landscapes have been carved by the glaciers, revealing a geologist’s dream of a country, ancient rocks exposed by the irresistible power of the ice. As a glacier melts, vast quantities of rocks of all sizes are deposited in a jumbled heap along its edges and at the front. Huge rocks are left on the landscape randomly as the glacier retreats - and the glaciers are definitely retreating. As we sailed south along Greenland’s coast, we did see glaciers reaching tidewater, but many more just visible on the mountainsides.

We could tell areas which had been recently glaciated by the presence and extent of lichen on the exposed rocks. Lichen grows very slowly, so the size of the patches on rocks can be an indication of when the ice retreated, and can easily be decades or hundreds of years old. 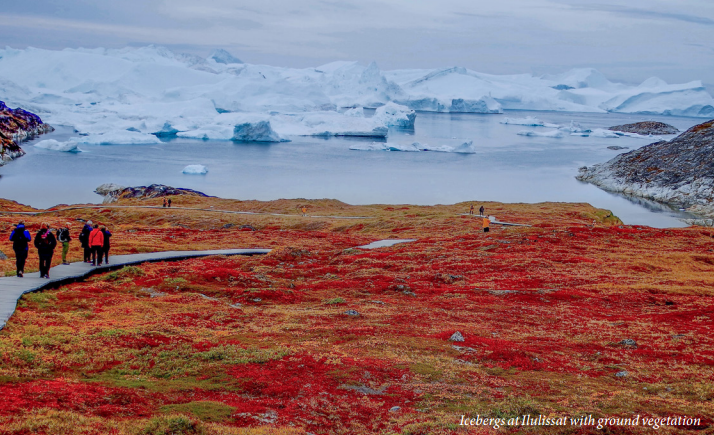 Although we were far above the treeline, there were still trees. Arctic willow and birch are most common, but they grow along the ground rather than upright, and can also reach ages of many decades. Like their upright cousins to the south, these trees also change color in the fall, producing vivid splashes of red and orange across the landscape. As I walked over the tundra, I found myself apologizing to the lichens and old trees I was walking over, hopefully not damaging them with my passage.

When, after three weeks, we reached Kangerlussuaq on Greenland’s west coast, it was time for most of the passengers to head home and a new group to join us aboard, to explore the rest of Greenland’s coast and then sail west into the Canadian Arctic. Among the joining passengers were Canadian astronaut Chris Hadfield and son Evan, and with them, the team of Generator Arctic, a group of photographers, writers and musicians, none of whom had been to the Arctic before. Unlike the previous three weeks, when the passengers were all seasoned polar travelers, we now had an amazing group of very talented people experiencing all of this for the first time. And that in turn improved my own experience immeasurably, by seeing these incredible landscapes all over again, through their eyes. We heard fascinating space stories from Chris and some intriguing talks from the Generator team – AND they brought guitars making for memorable evening music in the bar. 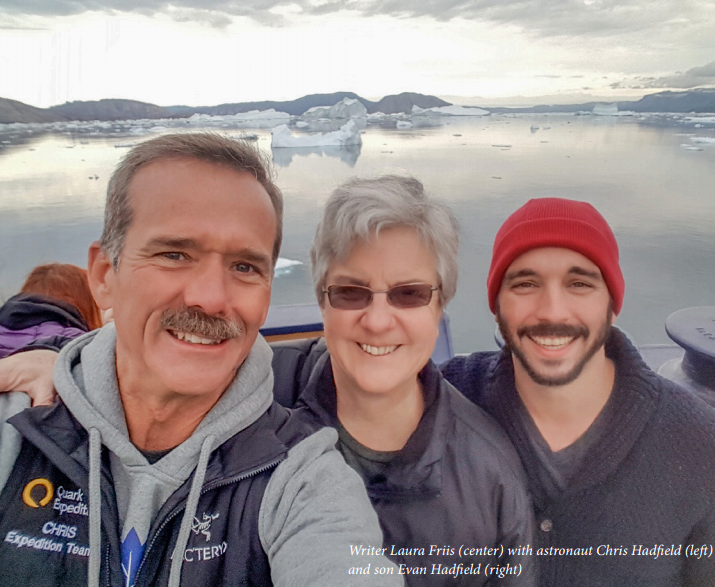 We continued north, exploring another UNESCO World Heritage Site: Ilulissat and the adjacent Sermeq Kujalleq glacier, which is flowing at several kilometers a year (up to 45 meters a day), produces enormous numbers of icebergs (35 billion tonnes per year, more than any other glacier outside Antarctica). We spent an exhilarating few hours zodiacing among these massive icebergs with occasional humpback whales for company. Despite the volume of ice flowing from the main ice sheet, the active face of this glacier is retreating every year. 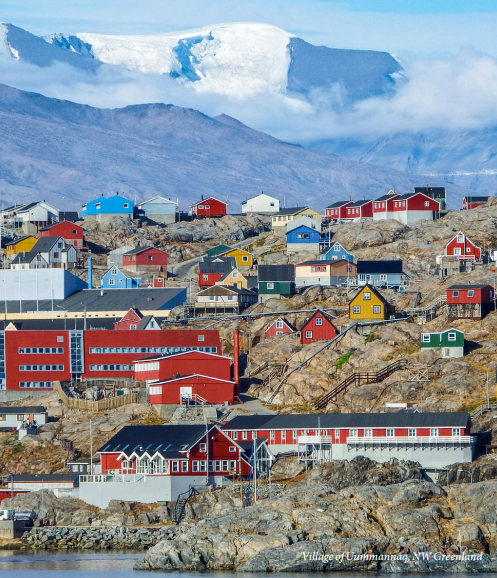 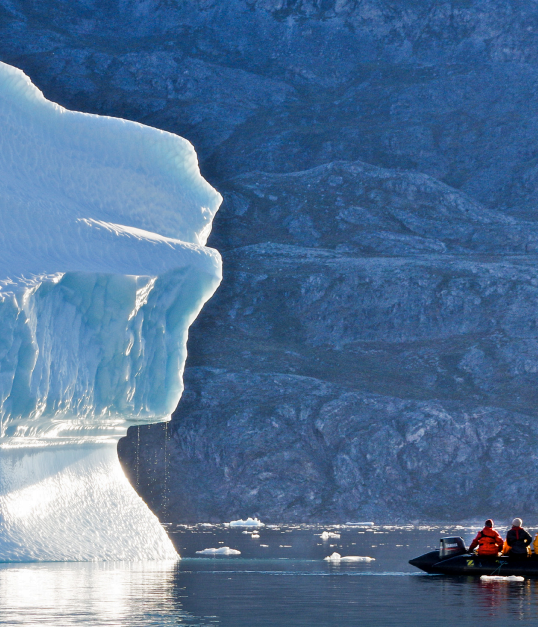 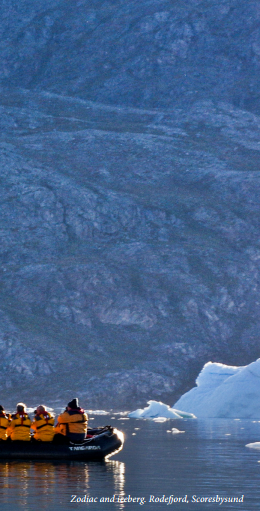 That is part of what draws so many of us back. From the gigantic white blocks of ice calving from the glaciers of Scoresbysund or Ilulissat, maturing over the years as they roll and split and age, displaying incredible shades of blue, textures from pebbled to ridged to as clear as glass, every iceberg is different and beautiful. Their history can be traced through the layers, the number of times it has rolled by the “water lines”. The glacier ice from which the iceberg is formed is thousands of years old, but once the iceberg leaves the fjord and begins its journey south, its life is often only a year or two. Finding a particularly sculpted and weathered iceberg with infinite shades of green and blue can keep photographers happy for hours!

A few glaciers and fjords later, we stopped for a visit at Qaanaaq, our last stop in Greenland, and then headed west into the Canadian Arctic.

Our first stop in Canada was at Grise Fiord on Ellesmere Island, where Canada Customs and Immigration officers cleared the ship and all of us. At this point, two Canadian helicopters and crew joined us, having spent four days and 14 refueling stops to reach us from their base in Quebec. We had planned a community visit, but the inclement weather (huge waves) made a shore landing difficult, so the helicopters came into play, ferrying some of the school children and townspeople to the ship to visit us, and taking the Hadfields into town to visit with the school.

Then we turned north again, sailing up between Ellesmere and Axel Heiberg islands and into Tanquary Fjord, where we reached our most northern point of this part of the voyage, over 81° N at the headquarters for Quttinirpaaq National Park, Canada’s second largest national park. The snow was now beginning, making hikes even more interesting because of the wildlife tracks we could easily see, and accentuating the geological formations of the mountains around us. Helicopter flights, charging and meandering continued each day, and we were also able to visit Eureka weather station, one of the few inhabited spots this far north (80°N).

Eventually we had to turn our ship south again, having a final magnificent encounter with a polar bear on the sea ice, and then, once again blocked by ice, circling back around Devon Island (with a brief stop for a polar swim by the intrepid or foolish) to reach Resolute, the end-point of our voyage. More snow, fog and big waves hindered the zodiac landings a bit, but we made it to the airport, and eventually were winging our way south again, as the KK continued west through the rest of the Northwest Passage and its home port in Russia. Since our return, I’ve adjusted to the southern noise levels again, have been happily following the photographs and videos being posted by the members of Generator Arctic.

And yes, I’m planning my next return to the ice.

About the author: Laura Friis is a travel consultant at Departures Travel (departurestravel.com) specializing in adventure travel and helping others to experience these amazing destinations. 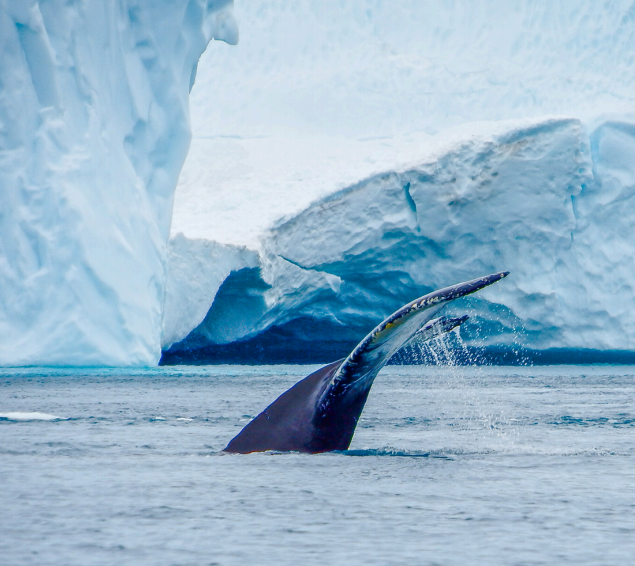 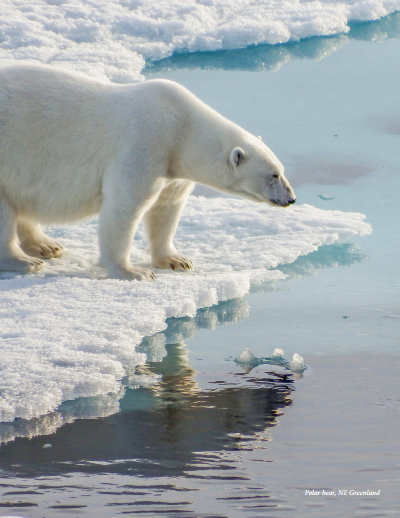